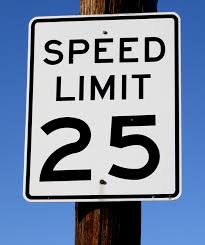 When Polly Trottenberg, NYC DOT commissioner, was asked to identify the 25 new "slow zone (25mph) roads" she said this: “A lot of the big roads that you've been hearing about, I think you know they will be part of future announcements,” she said. “You’ll have to stay tuned.”

Eyewitness News
NEW YORK (WABC) -- Drivers in New York City are being urged to slow down, and the message is being enforced with 25 newly designated slow zones.
The city's transportation commissioner announced the first of the zones Wednesday.
The speed limit on a nearly eight mile stretch of Atlantic Avenue from Brooklyn Heights to Woodhaven, Queens will be reduced from 30 to 25 miles per hour, in an effort to prevent accidents like the one that injured pedestrian John Longo.
"I'm very lucky to be alive, very lucky to be alive," said Longo.
He was walking home on the night of December 6th when a driver turned onto Atlantic and badly injured him. He loves the new speed limit.
"I think it's a great idea," said Longo. "It's long overdue but we have a new administration. They are actually doing things, taking action."
The mayor calls his plan Vision Zero, a new slower speed limit and timed lighting on major roadways.
So far his vision seems to be working. Traffic deaths this year are down 26 percent. Last winter there were 69 fatalities in the city, this year 51.
Among those killed last year was a 12-year old boy on his way to soccer practice.
"Please remember Sammy and this is his photo and do everything in your power to make our streets safer," said the boy's mother, Amy Cohen.
Most drivers say they support the mayor's vision. But a few admit, it'll lead to much worse traffic.
"I don't see why it should go to 25," said driver Tony Ayar. ('It'll make you slow down I guess?") "it really is, there's a lot more traffic. Everybody's just going to get from A to B slower."
The new signs will go up and enforcement begins later this month. The mayor says it'll mean lives saved.