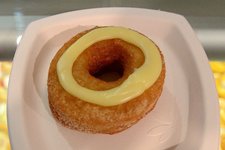 New York City residents and tourists are apparently not alone in their love of Cronuts, those croissant-and-doughnut hybrids that have people lined up for blocks before dawn outside a SoHo bakery.
Online video showing a mouse running around in the Dominique Ansel Bakery on Spring Street, which shot to fame after its eponymous chef created the pastry, led health officials to temporarily shut the shop on Friday.
The closing was reported on Friday on the website Gothamist, which noted that the bakery had been open earlier in the day.
Inspectors from the city’s health department found a severe mouse infestation at the bakery requiring professional pest control, and the bakery cannot reopen until inspectors determine the problem has been fixed, an agency statement said.
No one answered calls to the bakery on Friday evening, butin a statement to Gothamist, a representative said employees had spent seven hours cleaning the bakery and the chef had been down on his knees searching for a mouse.
“They didn’t find anything and anticipate it may have come from the outside as we have a greenhouse and park with doors opened during the nicer weather days,” the representative said. “As you guys know, cleanliness is something that is of utmost importance to us and in the close to three years we’ve been opened we have received nothing but A’s on our health inspects.”
It was not the first time the bakery was cited for having uninvited visitors with more than two legs. It received an A grade after its last inspection in October, though inspectors found evidence of mice and flies in areas where food was prepared and served, according to health department records.
The video of the mouse was posted to YouTube on Thursday by a customer and had been viewed more than 50,000 times by Friday night.
The bakery will probably be closed over the weekend to allow workers to re-cement the basement, according to a bakery spokeswoman, who told WNBC that the bakery hoped to open on Monday after another inspection.