Brooklyn Boxer Rises, but Her Feet Stay on the Ground

Brooklyn Boxer Rises, but Her Feet Stay on the Ground - NYTimes.com 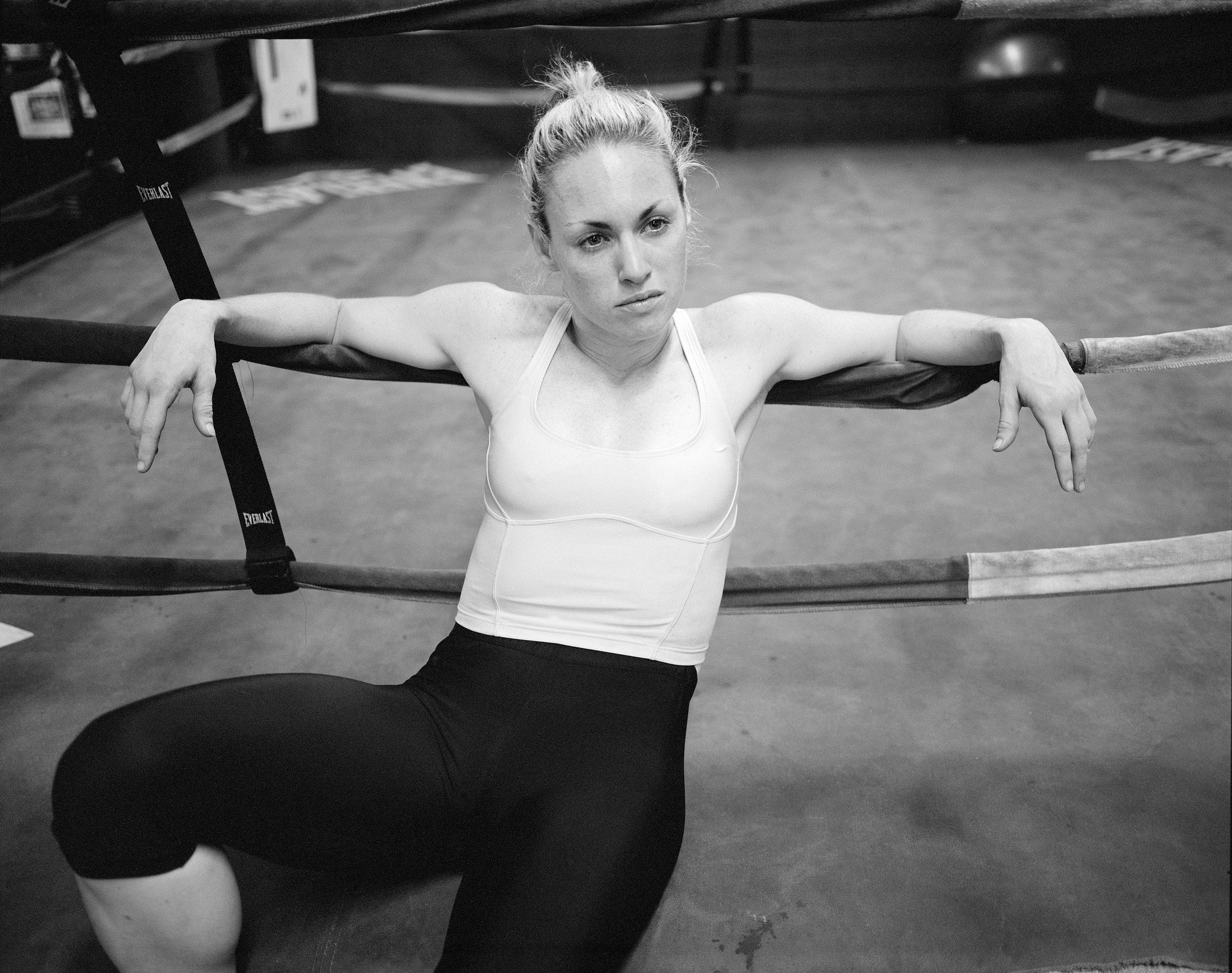 Heather Hardy tugged at her skirt as she explained what happened to it.
“The day after Sandy, we found this skirt floating around the living room,” said Ms. Hardy, 32, who was living on her mother’s couch at the time of the hurricane. The skirt had blood on it, she said, because “I’d fought in it three days before and gotten a head butt that needed stitches.”
Months before the storm, she and her daughter, Annie, 9, had lost most of their belongings in an apartment fire. The flood, which destroyed her parents’ house — along with others in their working-class neighborhood — took almost everything else.
But not the skirt. “I couldn’t get rid of it,” she said. “It was my debut skirt from my first professional fight.”
After years of struggle, Ms. Hardy is a rising force in professional boxing and has become a source of pride in Gerritsen Beach, the tightknit Brooklyn neighborhood where her family’s roots stretch back six generations.
She did not walk into a boxing gym until 2010, but has won all nine of her pro fights, the Universal Boxing Federation international super bantamweight title, a 2011 national championship and a 2012 Golden Gloves award. She is the first woman to sign a long-term promotional deal with Lou DiBella, a high-profile boxing promoter with a roster of top-ranked male boxers.
In the ring, the petite, 5-foot-5 boxer is a formidable brawler, wearing the colors of Ireland and two blond braids. “I’m not a pretty fighter,” she said. “I fight like a boy.” She is intent on putting on a good show: People may come to see the male headliner, “but I have to make them remember the girl,” she said. Her fans, especially those from Gerritsen Beach, are passionate at her fights. Celebrities — including 50 Cent, Rosie Perez and Susan Sarandon — have been in the audience.
Ms. Hardy is among a growing number of female boxers carving out space in a male-dominated sport. But it is not easy.

“They don’t get equal pay,” said Bruce Silverglade, 67, the owner of Gleason’s Gym in Brooklyn, who has encouraged Ms. Hardy and other female fighters. Even at the top, women make only about $1,000 a round. And “women have a much harder time getting fights,” Mr. Silverglade said. “In the general population, there’s still a feeling — women shouldn’t be boxin
Despite her success, much remains the same for Ms. Hardy. She still starts working out at Gleason’s Gym at 6 a.m., with her trainer and mentor, Devon Cormack, 55, a soft-spoken former kickboxing champion. She still hustles to sell tickets to her fights. She still trains clients so that she can pay her rent.
Until a few months ago, she got up before dawn to take a bus and two subway trains to Gleason’s. She hated being away from Annie, sometimes 15 hours a day. In their new apartment in Dumbo, near the gym, she sleeps on the couch. Annie has the bedroom.
Ms. Hardy was driven even as a girl. Her family has lived in a series of bungalows in Gerritsen Beach, the predominantly Irish enclave between Sheepshead Bay and Marine Park, since her great-great-grandmother emigrated from Scotland in 1929. She got top grades in school. “If there was something she wanted,” said her aunt, Karen Bianco, 47, “she wouldn’t ask, ‘Can I have, can I have?’ She’d work for it.”
Yet the seaside blocks, where families have known one another for generations, can feel insular. Early on, “I wanted to get out,” Ms. Hardy said, having been determined to avoid a well-worn neighborhood path. “You get out of high school, you have a kid, you get married,” she said. “Then you get a job and wait for your parents to die so you can move into their home.”
College seemed a way out, and she attended the John Jay College of Criminal Justice in Manhattan. “I felt really fortunate,” she said. “I had a vision of a bigger picture.” But after graduating at 22, with a major in forensic psychology, she got pregnant and married her childhood sweetheart, who worked for the Sanitation Department.
“I felt like a guy in a dress,” she said about her years as a wife and a mother at home in Gerritsen Beach. During a painful divorce, she worked multiple jobs to support herself and Annie. She did some kickboxing as a creative outlet, then stopped for lack of money.
“For about a year, I did nothing,” she said. “I found myself completely lost.” She decided to try Gleason’s.
Sparring in the legendary old gym, she felt an immediate jolt. “Boxing was the only thing that felt completely mine,” she said. “When you find something you love, you don’t want to do it just a little bit.”
Mr. Cormack took notice. “I saw something in her,” he said. “She was making mistakes, but giving 150 percent, just nonstop effort.”
Ms. Hardy initially trained with Mr. Cormack’s younger sister, Alicia Ashley, a World Boxing Council world champion he had trained. “But I kept losing,” Ms. Hardy said. The night of her second amateur loss, Mr. Cormack ended up working her corner. “I said, ‘Dev, I don’t want to lose anymore.’ He said ‘O.K.’ and took me as his project.”
He and Ms. Hardy are tied at the hip. “We’re together in everything,” Ms. Hardy said, explaining that even their money is pooled. Mr. Cormack helps her out with living expenses. “I know other fighters, married to their trainers. We’re not, but we might as well be.”
Her ties to Gerritsen Beach remain tight, but “it’s a relief to be out,” Ms. Hardy said. “I get to be around Annie all the time.” After she picks her daughter up at school, they walk to Gleason’s, where Annie does homework and plays with a hula hoop. “I make my mom bring me groceries from our neighborhood,” Ms. Hardy added, smiling. “Everything is so expensive here.”
In Gerritsen Beach, Ms. Hardy had worried, what if Annie doesn’t get to see a bigger picture?
“I didn’t want to be another generation passing along my parents’ house,” she said. At her new school, “Annie’s learning ‘good morning’ in 30, 40 languages.”