Subway Heroes Come to the Rescue of Fallen Treasures 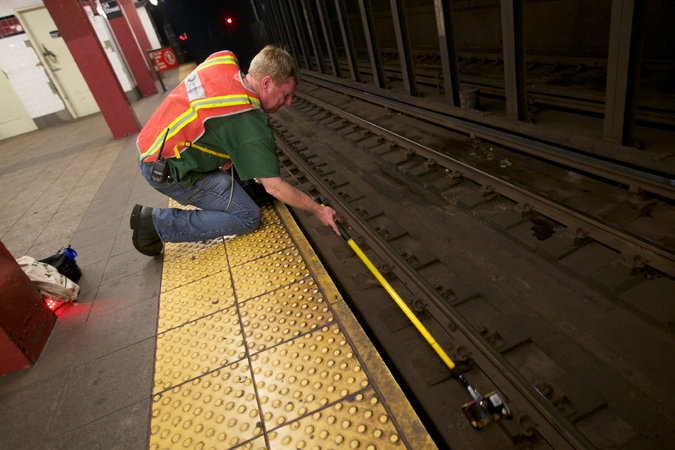 Subway Heroes Come to the Rescue of Fallen Treasures - NYTimes.com

(Excerpt)
The requests trickle through the bowels of the New York City subway system, funneled to workers more accustomed to calls about tunnel fires or ceiling leaks.
A problem is reported at Columbus Circle one recent afternoon. A passenger could be in great distress. Delays are minimal, but movement on the tracks has perhaps never been slower.
So would a crew mind collecting its helmets and hauling its mechanical claw to rescue the turtle — fumbled by a rider — currently plotting its very methodical getaway from Midtown train traffic?
“It’s a big city,” a transit worker, Vinny Mangia, had said a day earlier, reciting a mantra of his office. “Somebody’s going to drop something.”
And somebody, if the item is sufficiently treasured, is going to try to pick it up. These are the fishermen of the subway system, cobbling together homemade instruments to pluck items from the tracks and release them to a grateful city.
Workers have returned a bag of hospital-bound blood and corralled a collection of artificial body parts, scooped engagement rings from the rails and reunited children with stuffed animals.
No comments:

Email ThisBlogThis!Share to TwitterShare to FacebookShare to Pinterest
Labels: subway

Plans have been filed with the Department of Buildings for a 333-foot-tallresidential tower at 1501 Voorhies Avenue in Sheepshead Bay. If the building rises, it will be four times taller than nearly everything in the surrounding neighborhood. New York YIMBY first spotted the new plans for the site, which was purchased in July by joint venture of Muss Development and AvalonBay.Sheepshead Bites points out that the seller, Acadia Realty Trust, had planned to build a two-building development with a 22-story condo tower that the neighborhood vehemently opposed, so they'll probably be totally on board with something even bigger, right?
The oddly shaped 110,028-square-foot chunk of land sits adjacent to elevated subway tracks, overlooking the Sheepshead Bay B/Q stop. It's just a couple blocks from the bay and was inundated with water during Hurricane Sandy, but the plans show that the mechanical systems will only be elevated to the first floor, which is better than the cellar, but not really "elevated." It will have 250 apartments, a 14,530-square-foot commercial space, 124 garage parking spaces, and 52 parking spaces in a surface lot. Perkins Eastman is the architect of record, and amenities—bike storage, a lounge, a playroom, and outdoor space—will be located on the second floor. The site needs zoning approvals, and community pushback should be expected.
AvalonBay currently has 10 projects in New York City, and two more are in development in Downtown Brooklyn. All of these are located in much trendier, more expensive neighborhoods than Sheepshead Bay, but Muss Development is very familiar with the farther reaches of the boroughs. Not far from the Voorhies Avenue site, Muss development the successful Oceana condos in Brighton Beach.
No comments: 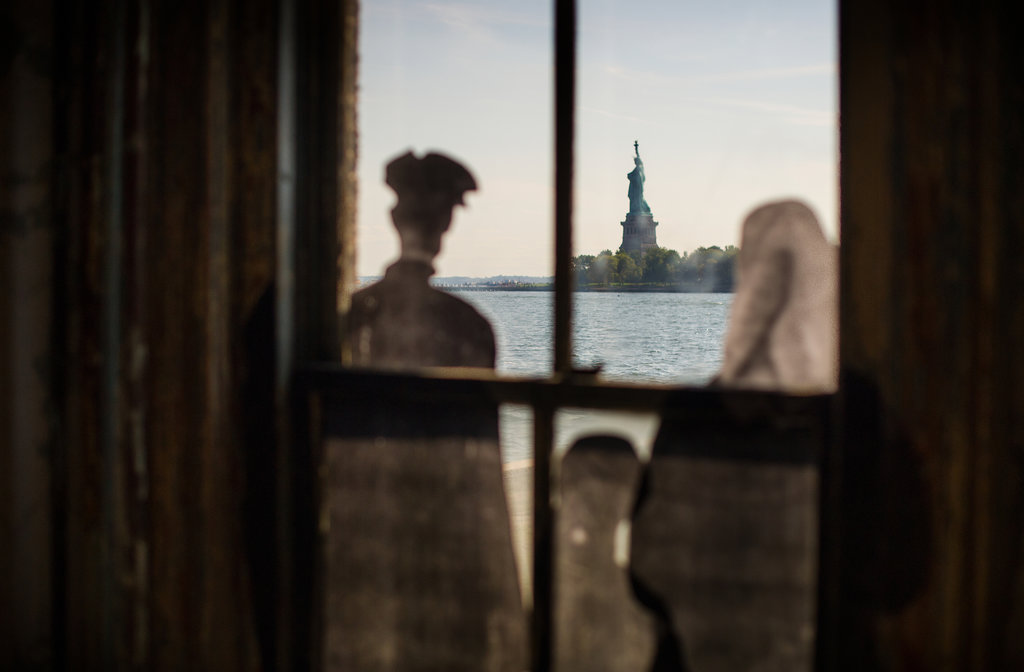 (Excerpt)
Their experience might have been forgotten, the photo buried with countless others in an archive. Instead, this black-and-white portrait has been revived, blown up to life-size and pasted across a broken window in the former Ellis Island Immigrant Hospital in New York harbor. Light streams through the children’s translucent faces, foliage visible beyond the crumbling building, which has been abandoned and off limits since 1954.

The image is part of a new installation, “Unframed — Ellis Island,” by the French artist JR, which brings this landmark building, its patients and staff members, to grainy but wrenching life. It is the first time in 60 years that the Ellis Island hospital has been open to the public. Tickets go on sale Thursday for guided tours that begin on Oct. 1.
No comments:

The city’s leading pro-bicycling group, Transportation Alternatives, came out against the “reckless behavior” Jason Marshall has been accused of in striking Jill Tarlov of Connecticut.

“As the most vulnerable users of our streets, pedestrians must be safe from reckless cycling, just as they need to be protected from reckless driving,” the group’s executive director, Paul Steely White, said in a statement. “This is particularly true in our parks.”
No comments: 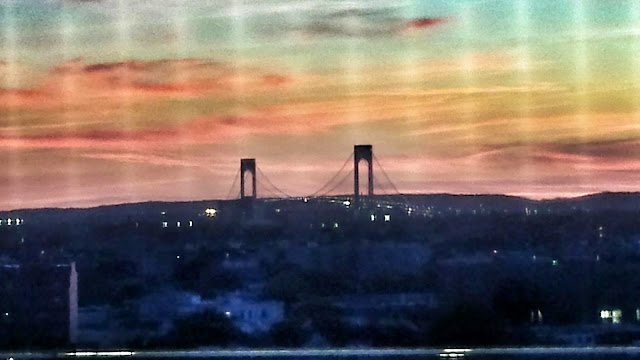 Fewer New Yorkers Getting the Benefit of Being Hired, and Fired, at a Young Age

Fewer New Yorkers Getting the Benefit of Being Hired, and Fired, at a Young Age - NYTimes.com
At first, I tried to ignore the unsettling signs that my job was in danger: the gentle prodding from my bosses, who suggested that I needed to broaden my responsibilities; the effusive praise for a charming, newly hired colleague, who was shaking things up with his get-up-and-go.

I dug in my heels. I was hired to do this, I told myself, not that. This was collecting admission from visitors to the Staten Island Children’s Museum (and burying myself in my favorite books when traffic was slow). That was actively engaging with parents and children, offering impromptu tours and demonstrating the ins and outs of the exhibits.

One afternoon, as I was heading home for the day, my boss told me not to come back. I went home and cried. I was about 14 years old. I had just been fired from my first job.

I learned something that day: An employee ignores her boss’s expectations — whether they seem reasonable or not — at her own peril. Thirty-odd years have come and gone, but I have never forgotten that lesson.
No comments:

Email ThisBlogThis!Share to TwitterShare to FacebookShare to Pinterest
Labels: jobs Manhattan who? Real estate database Streeteasy.com just released a report comparing median prices in Brooklyn (from the first seven months of the year) to Manhattan's, and it proves something many of us have long suspected: Brooklyn is expensive, yo. So expensive, the price of real estate in some of its neighborhoods easily surpassed Manhattan's median sale price of $890,000. 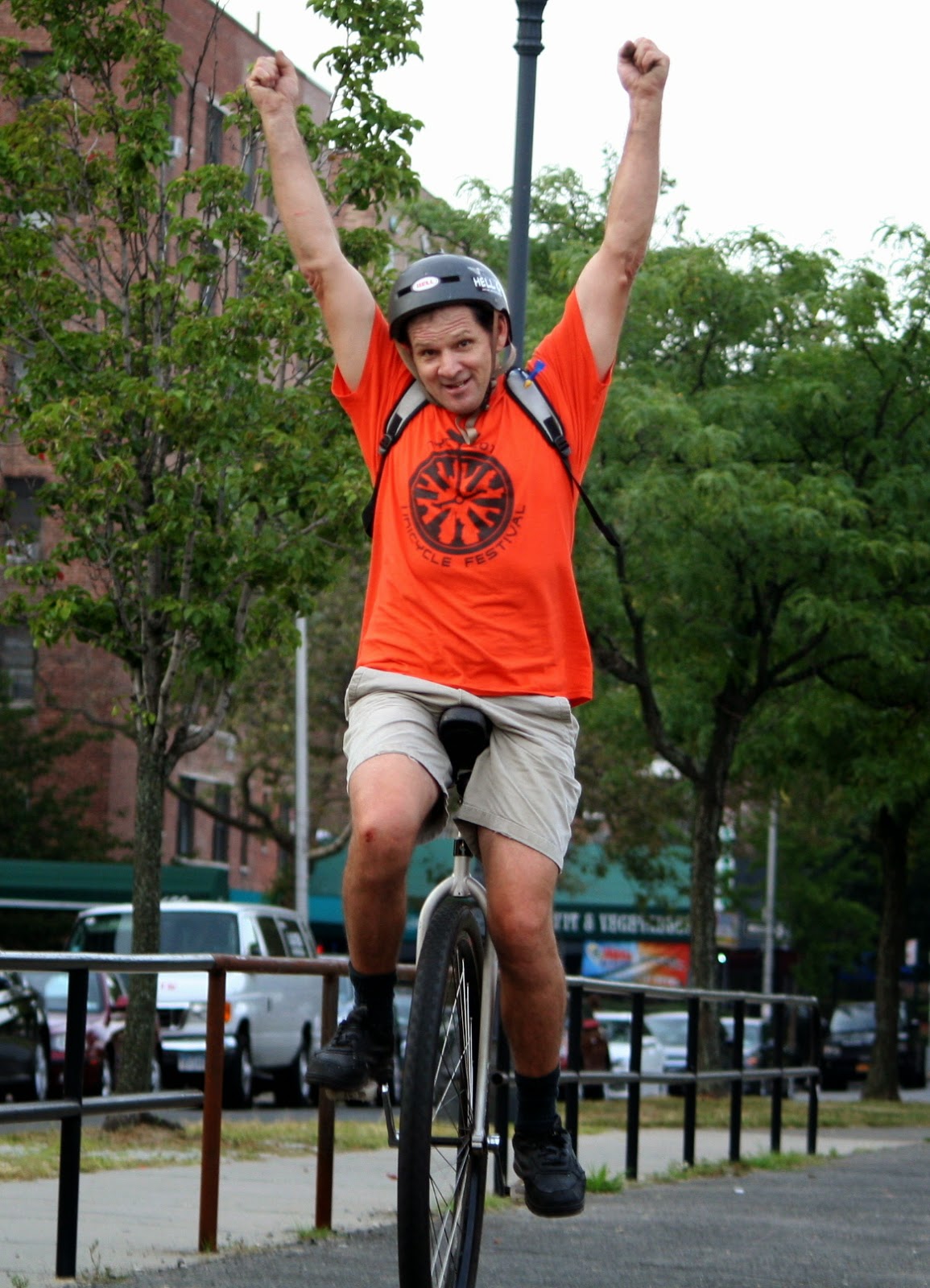 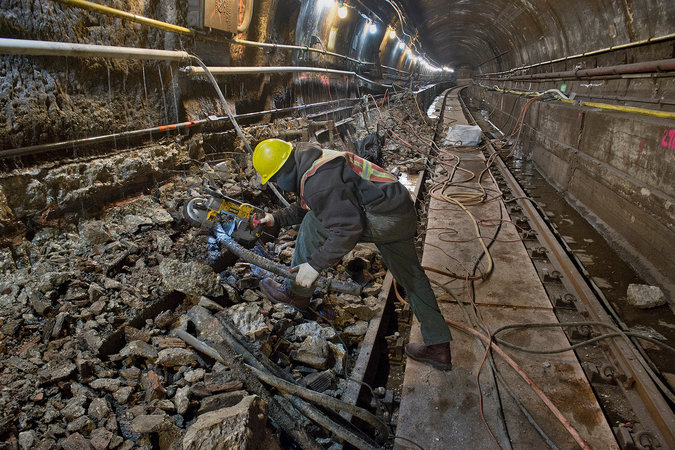 Subway service through a storm-damaged tunnel between Brooklyn and Manhattan is set to resume in time for the commute on Monday morning, according to the Metropolitan Transportation Authority’s website.
The N and R trains will start running through the Montague Tunnel, which has been closed since last summer to repair damage caused when Hurricane Sandy struck in late 2012. The tunnel runs under the East River between Court Street in Brooklyn Heights and the Whitehall Street station near the southern tip of Manhattan.
The reopening of the tunnel will come a couple of weeks ahead of schedule: The authority had said it would be ready by October.
Despite what would seem to be good news, the authority was reluctant to share information.
Adam Lisberg, a spokesman for the transportation authority, declined to comment on the matter, which was reported by The New York Post.
But the Trip Planner function on the authority’s website gave away the plan. It estimated that a trip on the R train from Court Street in Brooklyn Heights to Whitehall Street in Lower Manhattan would take about four minutes on Monday morning. On Friday, that trip would have taken at least 22 minutes and would have involved a transfer from a No. 2 train to a different train or a bus. 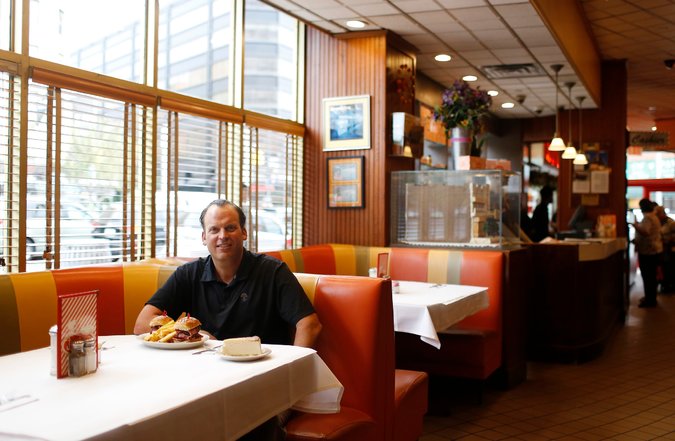 It was headed for another distinction this year, when Alan Rosen, who took over the business in 1992 and whose family has owned the restaurant since its first cheesecake, decided to sell the two-story building. In a neighborhood where real estate brokers talk about record-setting prices and rents the way pilots used to talk about breaking the sound barrier, the sale was major news. Offers to buy and build an apartment tower poured in from Brooklyn, Manhattan and abroad. The highest bid: $450 per buildable square foot, well over the previous high for Brooklyn of $350, for a total of $45 million in cash.

“That’s a lot of cheesecake,” said Mr. Rosen — who, nevertheless, and after much agonizing, a visit to his therapist and a series of sleepless nights, turned it down.

Email ThisBlogThis!Share to TwitterShare to FacebookShare to Pinterest
Labels: Junior's

ASHAROKEN, N.Y. (AP) — On a tiny spit of land off Long Island, the wealthy village of Asharoken faces a dilemma borne of Superstorm Sandy.
Either it accepts millions of dollars in federal aid to build a protective sand dune and for the first time in its nearly 90-year existence allows the public to use its beach or it rejects the aid and retains its privacy, potentially worsening an erosion problem that saw part of its main road washed out and power lines toppled during the October 2012 storm.
But some of the 600-plus residents in the village of million-dollar homes worry opening up the area could lead to traffic problems, trespassing and more garbage.
"I think privacy, pollution and safety, these are the three main concerns," residentAsenneth Elsin said. "I don't have a problem sharing, but unfortunately there will be people not following the rules."
Asharoken is just one place where the tussle among coastal protection, property rights, public access and federal funding is playing out in New York and New Jersey, both hit hard by the storm. 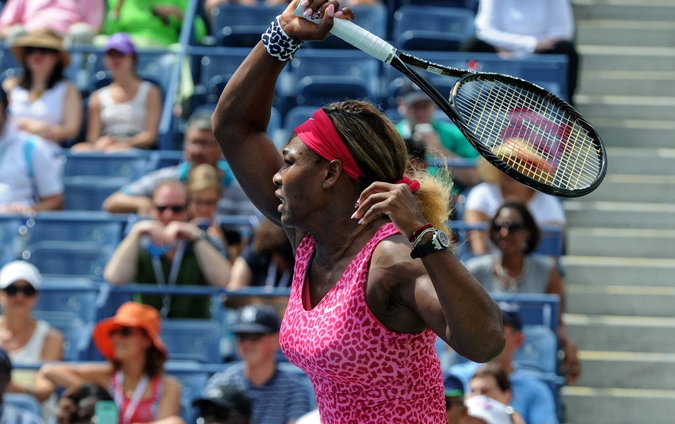 A Tower in Brooklyn, but Soon Just a Memory 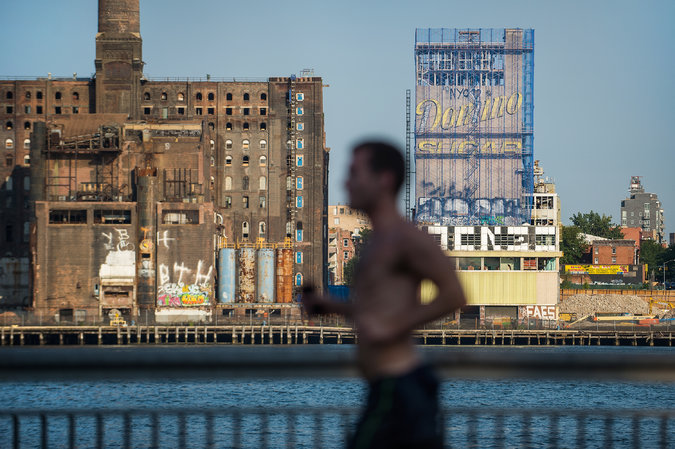 A Tower in Brooklyn, but Soon Just a Memory - NYTimes.com

(Excerpt)
From the East River Ferry, it seems to belong more to the industrial Brooklyn Navy Yard than to the increasingly glass and steel skyline of Williamsburg: a hulking mass of brick, covered with graffiti, that could pass for a ruined castle were it not for the insistent modernism of the beige refinery tower that squats to its right. But the tower holds what to many is the most important part of the whole structure: the yellow letters that spell out Domino Sugar.
No comments:

(Excerpt)
Two teenage French girls, arrested last week in a crackdown on citizens who consider traveling to other countries to join “jihad,” were planning to attack a synagogue in Lyon with a suicide bomb, French media revealed Friday

The two, 15 and 17 years old, were detained and interrogated last week in Venissieux, a suburb of Lyon in southeastern France, and Tarbes, a town in the south, after French authorities uncovered a plan to bomb the Great Synagogue of Lyon. They were charged for conspiracy to commit terrorism.