Nathan’s Famous Won't Reopen Till Spring 2013 Because of Damage 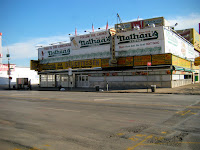 The super storm that ravaged the People’s Playground last month forced the iconic frankfurter emporium to close for the first time in its 96-year history, company officials say.

“Nathan’s has begun the process of rebuilding and anticipates reopening this spring, before the summer season,” vowed a spokesman for the nationwide company, which began with a small hot dog stand at the corner of Surf and Stillwell avenues.

Nathan’s grilled dogs — and much of its equipment — ended up under water when the Oct. 29 hurricane hit the Boardwalk. The company wouldn’t comment on the extent of the damage, but did say its losses were comparable to other Surf Avenue mainstays, which had fluid from the sewers bubble up into their businesses and destroy their interiors.

“Hurricane Sandy caused significant damage to the Nathan’s facility as it did to many other residences and businesses in Coney Island,” the spokesman said.

But those who like to celebrate the anniversary of their nation’s birth with the Nathan’s Famous International Hot Dog Eating Championship needn’t panic: the restaurant reported that its beloved battle of gluttonous gladiators is still on the menu for next summer — which contest organizer and promoter George Shea said was a hopeful sign that the beloved restaurant — and the storm slammed amusement area — will reopen soon. “The truth of the matter is that the hurricane was devastating to everyone, and there are many other Nathan’s locations where you can get the same food, but the one in Coney Island is the one people come to every summer, and right now they are rebuilding,” said Shea.

Reach reporter Will Bredderman at (718) 260–4507 or e-mail him at wbredderman@cnglocal.com. Follow him on Twitter at twitter.com/WillBredderman
©2012 COMMUNITY NEWSPAPER GROUP