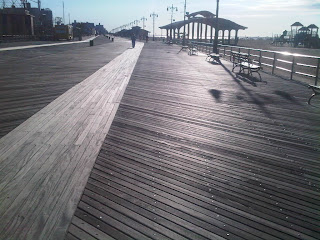 
Law360, New York (December 14, 2012, 7:50 PM ET) -- A New York state judge has ruled that the reconstruction of part of the iconic Coney Island boardwalk is exempt from an environmental review, despite its plans to swap tropical hardwoods for plastic lumber and concrete, according to an opinion filed Wednesday.

Siding with the New York City Department of Parks and Recreation, Judge Martin M. Solomon of the state Supreme Court ruled Dec. 10 that the project, which seeks to replace about 56,000 square feet of boardwalk, is not significant enough to require a review..