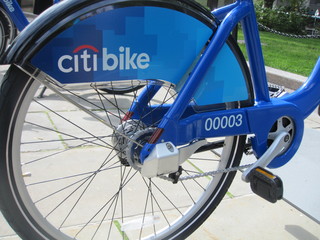 City's Bike Share Program to Launch in May After Sandy Damaged Some Gear - DNAinfo.com New York

NEW YORK CITY — The city's long-delayed bike share program is on track to launch in May, after being pushed back two more months because of damage sustained during Hurricane Sandy.
There will be 5,500 bikes at 293 stations in Manhattan and Brooklyn, according to the Department of Transportation.
Initially there were going to be 7,000 bikes and 420 pickup and drop-off stations, but flooding at the program's Brooklyn Navy Yard facility, where about two-thirds of the equipment was stored, harmed some electrical components, the DOT said. Some bikes and hardware stored there were not damaged or can be restored or replaced, officials said.