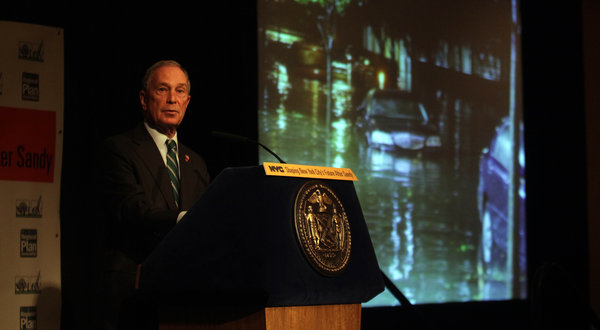 (Excerpt)
Mr. Bloomberg said the city would consider the construction of dunes, jetties, levees and berms along coastal areas to help reduce damage from future storm surges. Height restrictions on some residential homes will be relaxed so owners can elevate their houses above the flood plain, and the city will update its building code to require more stringent protection against floods.

The city will also update its flood maps and extend the so-called Zone A evacuation area to include Howard Beach, Queens, and the Brooklyn neighborhoods of Gerritsen Beach and East Williamsburg, communities that were heavily and unexpectedly damaged by flooding from Hurricane Sandy.

“But we cannot just rebuild what was there and hope for the best,” he added. “We have to build smarter and stronger and more sustainable.” The city has convened a working group “to determine exactly what that means,” he said.