I have the right to run red lights 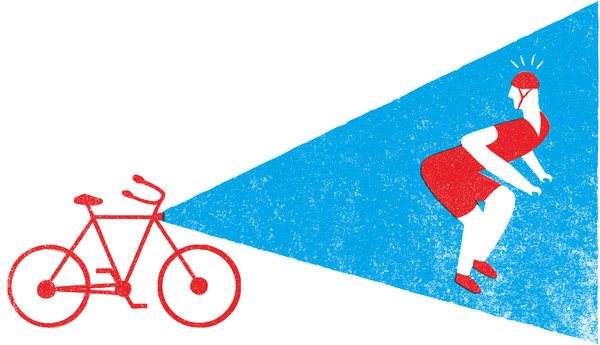 If Kant Were a New York Cyclist - NYTimes.com


THE rule-breaking cyclist that people decry: that’s me. I routinely run red lights, and so do you. I flout the law when I’m on my bike; you do it when you are on foot, at least if you are like most New Yorkers. My behavior vexes pedestrians, drivers and even some of my fellow cyclists. Similar conduct has stuck cyclists with tickets and court-ordered biking education classes. 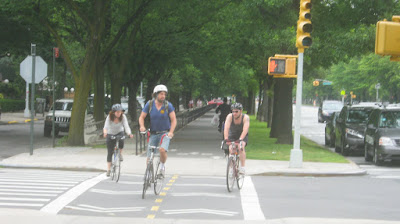 But although it is illegal, I believe it is ethical. I’m not so sure about your blithely ambling into the intersection against the light while texting and listening to your iPod and sipping a martini. More or less.
I roll through a red light if and only if no pedestrian is in the crosswalk and no car is in the intersection — that is, if it will not endanger myself or anybody else. To put it another way, I treat red lights and stop signs as if they were yield signs. A fundamental concern of ethics is the effect of our actions on others. My actions harm no one. This moral reasoning may not sway the police officer writing me a ticket, but it would pass the test of Kant’s categorical imperative: I think all cyclists could — and should — ride like me.


I am not anarchic; I heed most traffic laws. I do not ride on the sidewalk (O.K., except for the final 25 feet between the curb cut and my front door, and then with caution). I do not salmon, i.e. ride against traffic. In fact, even my “rolling stops” are legal in some places.
Paul Steely White, the executive director of Transportation Alternatives, an advocacy group of which I am a member, points out that many jurisdictions, Idaho for example, allow cyclists to slow down and roll through stop signs after yielding to pedestrians. Mr. White e-mailed me: “I often say that it is much more important to tune into the pedestrians rather than tune into the lights, largely because peds jaywalk so much!”
If my rule-breaking is ethical and safe (and Idaho-legal), why does it annoy anyone? Perhaps it is because we humans are not good at weighing the dangers we face. If we were, we’d realize that bicycles are a tiny threat; it is cars and trucks that menace us. In the last quarter of 2011, bicyclists in New York City killed no pedestrians and injured 26. During the same period, drivers killed 43 pedestrians and injured 3,607.
Cars also harm us insidiously, in slow motion. Auto emissions exacerbate respiratory problems, erode the facades of buildings, abet global warming. To keep the oil flowing, we make dubious foreign policy decisions. Cars promote sprawl and discourage walking, contributing to obesity and other health problems. And then there’s the noise.
Much of this creeping devastation is legal; little of it is ethical, at least where, as in Manhattan, there are real alternatives to the private car. But because we’ve so long let cars dominate city life, we take them, and their baleful effects, for granted. The surge in cycling is a recent phenomenon: we’re alert to its vagaries.
But most of the resentment of rule-breaking riders like me, I suspect, derives from a false analogy: conceiving of bicycles as akin to cars. In this view, bikes must be regulated like cars, and vilified when riders flout those regulations, as if we were cunningly getting away with something. But bikes are not cars. Cars drive three or four times as fast and weigh 200 times as much. Drive dangerously, you’re apt to injure others; ride dangerously, I’m apt to injure myself. I have skin in the game. And blood. And bones.
Nor are cyclists pedestrians, of course (at least not while we’re pedaling). We are a third thing, a distinct mode of transportation, requiring different practices and different rules. This is understood in Amsterdam and Copenhagen, where nearly everyone of every age cycles. These cities treat bikes like bikes. Extensive networks of protected bike lanes provide the infrastructure for safe cycling. Some traffic lights are timed to the speed of bikes rather than cars. Some laws presume that in a bike-car collision, the heavier and more deadly vehicle is at fault. Perhaps as New York City’s bike share program is rolled out, these will become the case here.
Laws work best when they are voluntarily heeded by people who regard them as reasonable. There aren’t enough cops to coerce everyone into obeying every law all the time. If cycling laws were a wise response to actual cycling rather than a clumsy misapplication of motor vehicle laws, I suspect that compliance, even by me, would rise.
I choose my riding style mindful of my own safety and that of my neighbors, but also in pursuit of happiness. Uninterrupted motion, gliding silently and swiftly, is a joy. It’s why I ride. And it’s why Stephen G. Breyer says he rides, sometimes to work at the Supreme Court: “The advantages? Exercise, no parking problems, gas prices, it’s fun. An automobile is expensive. You have to find a place to park and it’s not fun. So why not ride a bicycle? I recommend it.” I don’t know if he runs red lights. I hope so.


Randy Cohen was the original writer of The New York Times Magazine’s “Ethicist” column and the author of the forthcoming book “Be Good: How to Navigate the Ethics of Everything.”