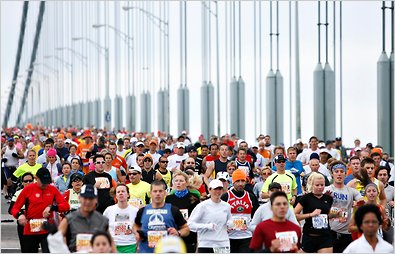 
After pushback from marathoners, New York Road Runners reversed itself and will now allow runners to check a bag at the starting line of the New York City Marathon on Nov. 4.
Two weeks ago Road Runners said that it would no longer let runners drop off a bag at the starting line in Staten Island and transport their clothing and other belongings to Central Park for pickup after the race. Runners were expected to make other arrangements or leave their clothing behind and carry money and cellphones with them during the race.
Hundreds of runners complained and some created an online petition calling on the race organizers to rethink the policy, which was designed to relieve the crowding in and around Central Park after the race. Groups unaffiliated with Road Runners created their own bag drop services. Last year Road Runners used 76 trucks to ferry belongings from the start to the finish.
On Thursday Road Runners said that it would allow runners to check a bag or choose an “early exit” from the Park for those who did not check bags.
“We’ve heard your feedback regarding the No-Baggage policy we announced recently, and we understand your concerns,” Mary Wittenberg, the president of Road Runners, said in a note to club members. “You’ll now have the option of either checking a bag for this year’s race or choosing a No-Baggage ‘Early Exit’ option.”
Runners who do not check a bag will receive a poncho and a long-sleeve T-shirt, and will be able to use Call Home stations. Those who check bags will receive bags that are smaller than in the past. The bags will be large enough to hold shoes, warm clothing and some personal items.