Etchings at 9/11 Memorial Are Called Both Anguished Tributes and Vandalism - NYTimes.com 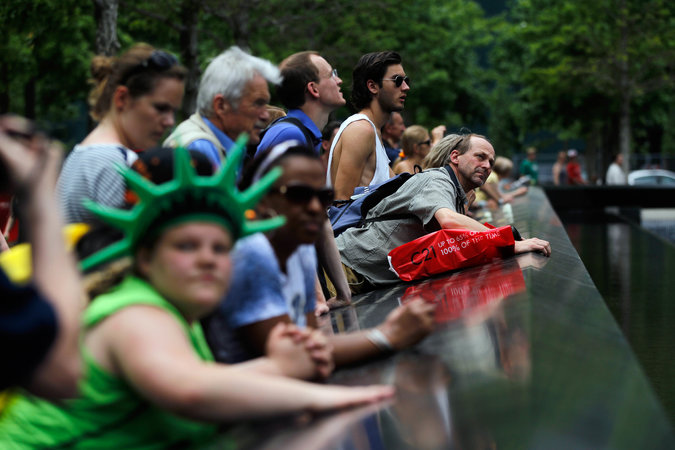 Etchings at 9/11 Memorial Are Called Both Anguished Tributes and Vandalism - NYTimes.com


The panels at the National September 11 Memorial containing the victims’ names must constantly be inspected for graffiti scratched into the bronze surfaces, a memorial spokesman said on Tuesday.
“While there have been instances when scratches have been discovered on the bronze panels of the memorial, our staff works very hard to address them immediately,” the spokesman, Michael Frazier, said in a statement. “The panels are cared for by hand and with a deep sense of responsibility and sensitivity by our dedicated staff.”
An article in The New York Post on Tuesday said that about “40 anguished messages” had been scratched into the panels, seemingly by victims’ friends and family members wanting to leave tributes.
Given that the messages were typically expressions of “love, grief and remembrance,” The Post said, “law-enforcement officials have declined to pursue investigations based on possible footage of the vandals in action.”


Continue reading the main story
“There have been no reports of disrespectful scratchiti,” the article said.

A visit to the memorial on Tuesday afternoon painted a different picture.

No “heartbreaking messages” could be found in a slow circumnavigation of the two memorial pools, around which the names are arrayed. But, at the parapet of the south pool, there was a single four-letter word scratched next to the name of Firefighter Sean S. Hanley of Ladder Company 20, who was killed in the attacks on Sept. 11, 2001.
The first two letters were unclear, allowing for several readings, a few of the most likely being offensive.
“Vile,” was Mr. Frazier’s word for the discovery. About an hour later, the word had been smudged over in a successful effort to obscure it.
But not before Norma and Paul Berger had a chance to see the graffiti for themselves. They had come to the memorial to pay their respects at a nearby name: that of Gregory Sikorsky of Squad 41, whom they fondly remembered as the young man who mowed their lawn in Rockland County and worked as a volunteer firefighter while he dreamed of joining the New York Fire Department.
Ms. Berger’s reaction — reaching across the panel to tenderly touch Mr. Sikorsky’s name — underscored how significant each name is. “Anyone who would desecrate this should be in jail,” her husband said.
Spokesmen for the Police Department and the Port Authority of New York and New Jersey, which owns and controls the World Trade Center site, did not respond to questions about enforcement policies at the memorial.
And Mr. Frazier did not answer a question about the general composition of messages and how many seemed to be personal tributes.
Jim Riches, a retired Fire Department chief, said his group, 9/11 Parents and Families of Firefighters and W.T.C. Victims, did not know whether the graffiti were loving or obscene as a rule. It did not matter, he suggested.
“Our group is upset about this type of vandalism by anyone — even family members — destroying this memorial,” said Mr. Riches, whose son, Firefighter Jimmy Riches, died in the attack. “The question we have is where is all the security at the No. 1 terrorist target in world?”
Kevin Kelsick and Mauricio Giammattei of Miami were upset by the graffiti at Firefighter Hanley’s name. They were also taken aback by the general air of informality that seems to have settled around the memorial, which has been open to the public without restriction since May 15.
Visitors could be seen sitting on the name plates and placing children on them, or using the plates as a subway map stand or as a tripod.
“We’re wondering how many generations will it take before this becomes a photo opportunity,” Mr. Kelsick said.
Mr. Giammattei said, “We’re seeing it right now.”