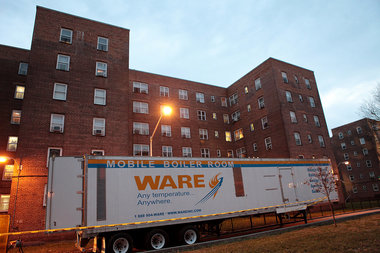 City to Install New Temporary Boilers in Red Hook Houses, Officials Say - Red Hook - DNAinfo.com New York
(excerpt)
At a special City Council hearing last week, NYCHA officials said it would take another two years before permanent boilers could be installed in NYCHA properties and would cost a projected $1.8 billion, according to reports.

The current boilers reportedly break down regularly and one even caught fire after an oil spill in Red Hook last year.

The installation of permanent boilers is contingent on funding from the Federal Emergency Management Agency, which the city has not yet received.