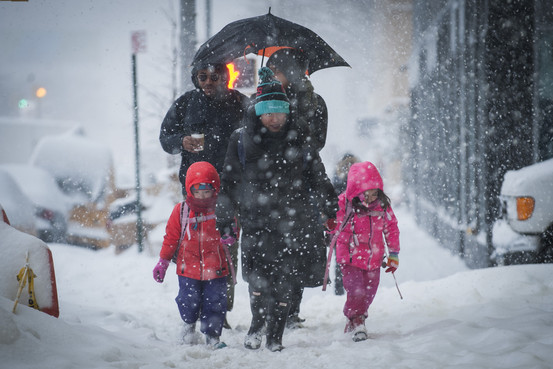 Winter-weary New Yorkers trudged to work and school Thursday as yet another snowstorm battered the region.

New York City Schools Chancellor Carmen Fariña announced late Wednesday that school would be open Thursday despite a forecast of heavy snow accumulation in the region. After-school programs and field trips were canceled.

While some working parents were relieved, the decision was met with resistance from others, who were anxious about getting their children to school safely.
“It’s not good for the kids to walk in the streets,” said Samar Baghadidi, a mother of four who was headed to Public School 2 in Astoria. Her 10-year-old son Adham Amin said, “The schools should be closed.”
“I believe that people should go to work and go to school, but this is really ridiculous and unsafe,” said Marguerite Camaiore, an attorney from Queens whose 11-year-old twins attend Most Precious Blood School in Astoria, which runs on the city public school schedule. “People haven’t had a chance to shovel, it’s still coming down so much, it’s hard to walk, it’s hard to see where the sidewalk is.”


Michael Mulgrew, president of the United Federation of Teachers, said it was “a mistake to open schools today.”

“I understand the desire to keep schools open. The only thing that trumps that is safety,” he said. “Having students, parents and staff  traveling in these conditions was unwarranted.”

“Today” show weatherman Al Roker also piled onto the decision to keep schools opening, saying on his Twitter account that his “long-range” forecast for Mayor Bill de Blasio was  “1 term.”

Mr. Blasio defended the call to hold classes, saying the decision was made that students could travel to school safely. “There are times when it’s 100 % obvious you have to close schools,” he said. “It’s a rarity and it’s something we do not do lightly.” (Mr. de Blasio also shot back at Mr. Roker, saying, “It’s a different thing to run a city than to give weather on TV.”)

At the same news conference, Ms. Fariña spelled out why the decision was made and said, “It’s absolutely a beautiful day out there right now.”

Gov. Andrew Cuomo, who declared a state of emergency for New York City, Long Island and other areas, said early Thursday that only 500 homes were without power. He warned that the heaviest band of snow was still coming.

There was at least one fatality locally attributed to the storm. At 10:40 a.m. a private plow was working in a parking lot at 6301 Eighth Ave. and struck a 36-year-old pregnant woman. She was transported to Maimonides Medical Center, where she was pronounced dead, police said.

In Manhattan, a woman narrowly escaped serious injury shortly before 11 a.m. when she slipped from a platform into the path of an oncoming train at the Broadway-Lafayette Street station.

“She was on the edge of the platform,” a NYPD spokeswoman said. “She was texting on her cell phone when she slipped and fell in front of the oncoming B train.”

It wasn’t immediately clear if the weather contributed to the fall in any way. The woman, whose name was not released, was removed from the tracks beneath the first car of the train,and taken to the hospital with an injury to one knee, police said.

The region’s bridges and tunnels are open, but motorists were being asked to drive at reduced speeds on some spans. The lower level of the Verrazano-Narrows bridge is closed.

Many coach lines that operate out of the Port Authority Bus Terminal were reporting cancellations and delays – passengers should check with their carrier before going to the terminal, officials said.

“It’s going to get ugly quick but so far so good,” said Dave Lisanti, 56, a dog handler with an extermination company, who came into Grand Central Terminal from Irvington, N.J. “Getting home is going to be another story.”

The MTA said Thursday afternoon it had temporarily suspended service on the Sea Beach Line – the tracks that carry N trains through a section of open-air, below-grade tracks through southern Brooklyn to Coney Island. Trains will be rerouted along the regular route of the D express so that crews can clear snow from the tracks and equipment along the exposed section of rail, a spokesman said. The MTA planned to restart regular service on the line in time for the evening rush hour, and was monitoring other subway lines with outdoor sections in case similar steps could be needed there.

After the evening rush, the MTA will curtail express subway service so trains can be stored in protected areas, to avoid stranding equipment as snow continues to build overnight.

Elsewhere on the regional transit system, Metro-North announced that it would shift to hourly service beginning at 4 p.m. The LIRR warned travelers to expect weather-related delays, and announced it was adding four additional afternoon departures, all before 4 p.m., to help commuters get out of the city.

NJ Transit announced Thursday afternoon that it had restored its Midtown Direct service to Penn Station, which had been suspended because of switch problems on Amtrak’s Northeast Corridor. The trains will run hourly on Thursday, the railroad announced.