The Century Bike Tour is back...no time for red lights.

My first contact with the annual Century Bike Tour sponsored by Transportation Alternatives was in 2011 when I tried to cross Neptune Avenue on my walk down Ocean Parkway to the Boardwalk.  Although I had the green light waves of cyclists blew past their red light  as they rode across the 7 lanes of  Ocean Parkway going east on Neptune Avenue.  Here is one of the photos that I took that morning showing riders crossing against the light.. 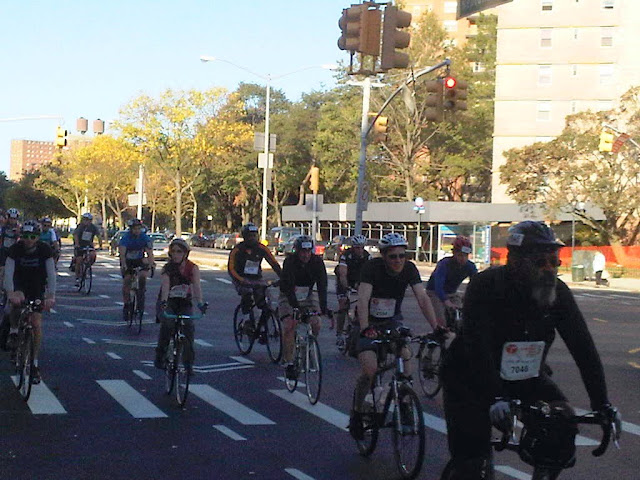 I posted this comment on their website.
While I support the greater use and enjoyment of cycling in the city I must report that during the tour event on Sunday 9/18 too many riders were not obeying traffic rules.  I walk down Ocean Parkway in Brooklyn to the Boardwalk every morning and today part of the tour crossed Ocean Parkway on the Neptune Avenue route.  Ocean Parkway is a 6 lane highway and Neptune Avenue particularly is one of the most dangerous intersections in Brooklyn.Recently a walk countdown timer was installed at that intersection which indicates our concern for the people in that neighborhood many of whom are elderly.  However, dozens of riders in packs rode through the intersection against the red light.  Also many rode three or four abreast in the traffic lanes.  If they did stop or slow down on Ocean Pkwy it was for a moment until they found a gap in the traffic so they could continue.  Too many riders have little regard to pedestrians and I myself (who is a rider) had to wait to cross even though I had the light and the riders were riding through it and trying to beat the oncoming Ocean Pkwy taffic.  This is not what I consider a safe or responsible way of using the roadways of this city and gives a bad name to cyclists.  Many of these riders were experienced and unfortunately they were the ones who seemed to encourage the rest of the pack of riders to continue in this unsafe manner.  I have photos from this morning that I would like to send to you. Thank you.  Allan
Here is the response that I received on September 28 from Ben Roberts, the events manager.
Hello Allen,
Thank you for comments and concern regarding the NYC Century Bike Tour.
Transportation Alternatives is committed to promoting safe and legal bicycling, as evidenced through our Biking Rules! campaign. (www.bikingrules.org)
We also promote it on the NYC Century Bike Tour web site and expect all riders to follow all traffic regulations.
Again I am sorry to hear that some cyclists on our tour were not obeying the rules of the road, and I assure we will continue to promote Biking Rules!.
Best
Ben
Ben McRoberts
Events Manager
Transportation Alternatives
127 West 26th Street #1002
New York, NY 10001

So last year I went back to the same intersection with my video camera and recorded four separate videos that showed the following:


Many cyclists rode safely but too many others ignored traffic laws and  safe cycling rules.
"The solution is simple...post a tour volunteer at that intersection to monitor and direct the riders in a safe and responsible way."

Here are the links to the four videos that were taken that day:
Videos of Century Bike Tour 2012

Here is one of those videos: