#Subway Extension Provides a Link to #HudsonYards, Still a Work in Progress 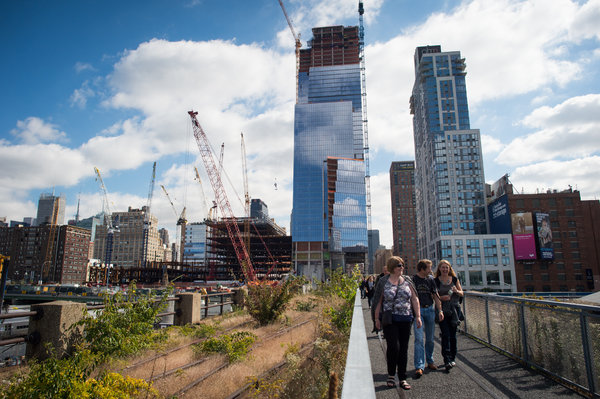 If Gertrude Stein were to ride the No. 7 train to the new end of its line on 11th Avenue in Manhattan, she might again declare that there is no there there. Not yet, anyway.

Riders emerging from the station find themselves in the center of what is supposed to be a thriving agglomeration of office towers, stores and high-rise apartment buildings. What they find today, though, is an urban park surrounded by construction sites, some bustling, some yet to roar to life.

What they will not find is a lot of commercial activity, not yet at least. Virtually all of the businesses that operated in the neighborhood — mostly light industrial and manufacturing shops — have been displaced. In their stead, developers plan to install fancy department stores, boutiques and restaurants.

For now, the vision of a full-featured neighborhood called Hudson Yards is still a glimmer in the eyes of New York City officials and real estate executives. But any lingering doubts that it would be built were erased last month when the linchpin of the master plan — the $2.4 billion extension of the No. 7 line from Times Square — opened to the public.