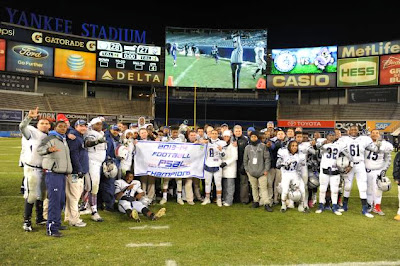 Lincoln High School’s football team, the Railsplitters (an awesome name, by the way), snagged their second title in three years with a 28 to 27 win at the PSAL City Conference championship at Yankee Stadium last week.
The team bested Tottenville Pirates for the title, despite suffering its own setback: senior quarterback Javon Moore sprained his ankle during their first offensive play. He muscled through the game before heading to the hospital after the match.
“He was a warrior and battled through and made a play when he had to,” Lincoln coach Shawn O’Connor told the Daily News.
It was a tight game, in which Lincoln pulled ahead by one point with less than five minutes on the clock. We urge you to check out the Daily News article for the dramatic play by play.

Congratulations to Lincoln High School (2800 Ocean Parkway) and the Railsplitters!