NYT, Others Cover 'So-Called Knockout Game' As 'A Spreading Menace or a Myth' 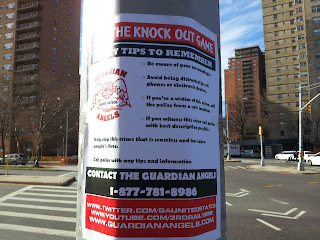 NYT, Others Cover 'So-Called Knockout Game' As 'A Spreading Menace or a Myth' | NewsBusters

(Excerpt)
In a November 22 item published in its November 23 print edition on Page A19, Cara Buckley at the New York Times, below a picture of a Guardian Angels member posting a warning in Brooklyn, cited "police officials in several cities" claiming that it "amounted to little more than an urban myth," and noted that Gotham officials were questioning "whether in fact it existed."